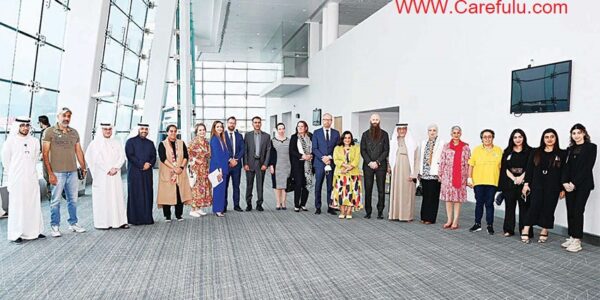 The law firm in Kuwait KUWAIT CITY, April 9: Taher Group Law Firm (TAG) held the Hague Talk event, which dealt with a case entitled “Were women’s rights affected during the Corona pandemic?” The event was in cooperation with the Dutch Embassy in the State of Kuwait, where the opening speech was given by the Ambassador of the Kingdom of the Netherlands to Kuwait and Bahrain, Mr. Laurens Westhoff, and Dr. Fawaz Khaled AlKhateeb from TAG. A member of the Kuwait Olympic Committee and the head of the joint delegation of Kuwait in The Olympic Games “Tokyo 2020” Fatima Hayat, Municipal Council Member Engr. Maha Al-Baghli, CEO of “Umniah” Sanaa Al-Ghamlas Factory, in addition to the event’s facilitator, lawyer Atyab Al-Shatti participated in the Event.

Participants in The Hague event
In the opening speech, Dr. Fawaz AlKhateeb indicated that Kuwaiti women are major contributors to the development process on State and society scales, noting that the Kuwaiti constitution promotes equality between all people and prevents discrimination based on sex in all its economic, social and political frameworks, as it supports justice, freedom and equality as principles that form pillars of society. He added that non-discrimination on the grounds of sex is an international principle related to the protection of human rights and requires society and the State to guarantee rights for all as stated in the International Covenant on Civil and Political Rights, the International Covenant on Economic, Social and Cultural Rights and the European Convention on Human Rights, all of which prohibit discrimination.

“There is no doubt that in our Arab environment, we still need to combat discrimination in all its forms, and this matter must be refl ected by respecting the independence of women and their ability to make their own decisions in all fields by adopting the concept of equal treatment and parity away from unfair treatment in all matters. Much can be learned from human history, especially with regard to women’s struggle for her rights, and religions are replete with the contents of this principle, which is also refl ected in the positive legislations,” he said, concluding that what” we seek through these activities is to create a gender-neutral legal environment.

It is noteworthy that the event began with lawyer Atyab Al-Shatti asking whether the Covid-19 pandemic affected women’s rights and activism. The question was directed to the audience, including the civil society institutions concerned with defending women and the student of the Gulf University, students from other universities, and some diplomats.

Women and sports:During the event, Fatima Hayat talked about her experience regarding the role of Kuwaiti women in sports and the Olympic Games and the historical challenges that she faced and still faces, pointing out the importance of involving women in leadership roles to contribute to providing them with full rights according to their own experience. She also stressed the importance of activating sports activities for women in Kuwait and adopting the idea of girls practicing all sports, including football, and enabling young girls to practice their hobbies and support them morally and materially at the national and international levels, as according to her experiences, she finds that girls face real challenges with regard to support in all its forms.

Violence against Women:On her part, a Member of the Municipal Council, Engineer Maha Al-Baghli, said that this symposium on International Women’s Day is distinguished by the participation of three women figures with different specializations. She pointed out that Covid 19 affected both women’s activities in general and women’s rights, too, as many women faced home violence due to the pandemic that curbed freedom of movement and curfew rules. She also stressed the importance of the role of civil society in promoting awareness about the law to combat violence against women, the containment of battered women, and the importance of activating care homes that women can resort to if they are exposed to violence.

Women, Society and the Culture of Environmental Protection:Mrs. Sanaa Al-Ghamlas ignited the enthusiasm of the students present about the third generation of human rights, which is the right to have a healthy and clean environment, and referred to examples, including the process of recycling and disposing of plastic without harming the environment, adding that this process is complicated and complex and needs synergy Youth efforts and government care. She added that the challenge she faced through her factory ‘Omnya’ when she sought to protect the environment of Kuwait by getting rid of the plastic without leaving any damage to the environment was great, despite the fact that the endeavours were in line with the sustainable development goals of the United Nations and the goals of the state, but the slow governmental measures and lack of support led to the closure of the factory.

On this occasion, Lawyer Abdul Aziz Taher AlKhateeb said that International Women’s Day is a day that has been identified as a result of the existence of shortcomings towards women in the world in general and in the eastern region in particular, considering that the presence of such occasions enhances the call to restore rights and fairness to women, thanking the students for their interaction as well as the Embassy of the Kingdom of the Netherlands for its cooperation in making this event a success and the interaction of the attendees from the Embassy of the United States of America, the Canadian Embassy and diplomats in general.

An industry veteran, Spierling has more than 20 years of experience in the region, having worked for a German law firm before joining Siemens. He earned a Master’s of Law degree at the University of Hamburg in Germany.

Spierling set up the Siemens Legal Department in the UAE upon joining the company in 2007. Since then, as the company’s General Counsel for the Middle East, he has forged close links to customers across the region.

“I’m excited to lead a great team and build on Wood’s success in Kuwait. Siemens is working hard to help Kuwait develop and diversify its economy, preserve its environment and achieve its social goals,” stated Spierling.

The technology major has a long track record in helping Kuwait build a more sustainable and diversified economy – a key objective of the Kuwait National Development Plan 2035.

“Siemens has operated in Kuwait for more than six decades. I’m honored to have the opportunity to build on that legacy and ensure that Siemens continues to contribute to the digital transformation necessary for Kuwait to prosper in the decades to come,” he added.

Lauding the appointment, Middle East CEO Helmut von Struve said: “We are confident that Oliver will lead Siemens in Kuwait to even bigger achievements at this pivotal moment in the nation’s development, and we look forward to deepening our partnership with Kuwait to help it fulfil its ambitious vision for 2035.”

Digitalization, electrification and automation are central pillars for the company. Siemens technology in Kuwait underpins the countries infrastructure, and it’s deployed at wastewater treatment facilities as well as the steel, cement, and food and beverage industries, he added.-TradeArabia News Service

The report charts out the progress the organization has made with respect to its environmental, social and governance (ESG) commitments against the World Economic Forum (WEF) International Business Council (IBC) metrics. The KPMG: Our Impact Plan 2022 update highlights how the firm is navigating toward becoming a better business and is supporting stakeholders in their ESG journey, across four categories — planet, people, prosperity and governance.

Speaking about the report, Dr. Rasheed Al-Qenae, Managing Partner, KPMG in Kuwait said, “It is the people who form the very core of our business, which is why it is one of the key areas of our focus. We are working to bring about a positive change and are doing the bit necessary to ensure a sustainable future for the people, stakeholders and the communities we operate in. The KPMG: Our Impact Plan is a representation of the values imbibed in the global organization and serves as a guideline to help KPMG track whether its clients are aligned to their ESG journeys or not.”

We have mentioned some of the key highlights below:

The need for sustainable and equitable practices are soaring, calling for businesses, governments and the society as a whole to adopt them. The organization is targeting a 50% reduction in emissions by 2030, remaining committed to its goal of 1.5°C Science Based Targets initiative (SBTi). Renewable energy usage in the organization also hiked to about 74% — compared to 56% in 2020. KPMG also published its first Net Zero Readiness Index to analyze other countries’ progress and abilities in terms of achieving net-zero by 2050.

KPMG created and introduced its Inclusion, Diversity and Equity (IDE) Collective Action Plan across the global organization. At present, almost one-third of the staff in KPMG Kuwait is female. This number stands at 48.4% for the global organization. Additionally, KPMG is devoted to ensuring that there is firm-wide compliance of its human rights commitments and is putting together a set of guidelines to facilitate the same.

In 2021, the global organization had announced a multibillion-dollar investment to embed ESG into its framework. KPMG is laser-focused on the ESG agenda and plans on investing US$1.5 billion in the three-year horizon — a portion of which will be utilized in making ESG hubs and accelerators to promote innovation and investment in the emerging markets. Efforts are also being made to further improve the organization’s tools and offerings to help boost clients in their ESG journey. In addition, the firm’s workforce surpassed 236,000, growing 6.1% y-o-y, and is being trained to drive a positive change. Furthermore, KPMG has invested about US$125 million globally in community initiatives, as compared to the US$124 million in 2020, and volunteered over 81,000 hours through pro bono work. In line with this, KPMG Kuwait’s CSR Committee, in collaboration with non-governmental organizations (NGOs) and other major organizations, conducted several activities in the fields of education and charity, among others. The committee is also working toward raising awareness around social and volunteering work to drive a positive change in the community. The global organization is on the trajectory of its US$5 billion investment directed toward technology, people and innovation, and is entering the third year of that commitment. KPMG is continuously working closely with key organizations to achieve the UN Sustainable Development Goal 4 (SDG 4), in addition to working with United Nations Educational, Scientific and Cultural Organization (UNESCO) to strengthen the economic capabilities of about 10 million disadvantaged young people and has also procured a strategy to do so by 2030.

KPMG played a key role in formulating the IBC metrics for ESG reporting, working alongside WEF. This is a testament to the firm’s use of its expertise to shape the sustainable business’ future. In addition, the organization has taken up roles at the International Integrated Reporting Council (IIRC), the Financial Stability Board’s (FSB) Taskforce on Climate-related Financial Disclosures (TCFD) and the Taskforce for Nature-related Disclosures (TNFD). As part of the wider role that it must play with regard to sustainability matters, KPMG will continue to support the International Financial Reporting Standards (IFRS) Foundation, as it is responsible for creating and publishing ESG reporting standards that its clients use to fulfill the requirements of the ever-evolving nature of reporting. In addition, the organization published its first ever Modern Slavery Statement, and all the Global Board members have completed the training on KPMG’s Code of Conduct and tax policies and procedures.

In conclusion, Karen Watts, Partner — Risk, KPMG in Kuwait said, “To safeguard the planet and preserve the quality of life from the dangers of existing and emerging threats, it is important that businesses, governments and communities come together to take up that collective responsibility. We are continually striving to transform responsibly on an organization level, assessing our supply chains and, at the same time, supporting other organizations in the ESG endeavors — all in the interest of leaving a safe, habitable planet for the future generations.”