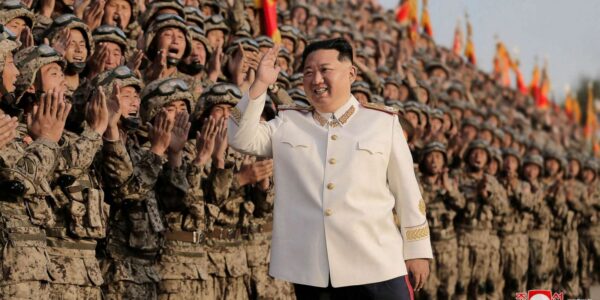 TOKYO: When President Joe Biden arrives in Seoul on Friday, on his first trip to the region as president, he’ll be landing in a volatile region at a volatile time.

Biden will seek to shore up ties with regional allies and advance his vision of a free and open Indo-Pacific region, but he’ll do so as the threat of another nuclear test from North Korea looms.

At the same time, U.S. allies South Korea and Japan continue to squabble over historical grievances, blocking a breakthrough in bilateral relations.

Increasingly bellicose North Korea continues to paint itself as a heavily-armed nation that its foes, including superpowers, should think twice about tangling with.

If any forces attempt military confrontation with the Democratic People’s Republic of Korea, they will perish, Kim reportedly vowed in a fiery speech.

Since 2021, North Korea has been steadily improving its missile technology, drastically increasing testing, including purported hypersonic missiles in January and a submarine-launched ballistic missile, or SLBM in May, and what is believed to have been a successful intercontinental ballistic missile test launch.

It was the first of its kind in years and Kim might very well have more ICBMs fired off during Biden’s visit.

In what has become the new normal, each test launch typically garners perfunctory rebukes from the U.S. and its allies, with Japan predictably condemning the act, lodging complaints with the U.N., and then vowing to share information.

Signs indicate the North is restoring tunnels at its Punggye-ri testing site, where all six North Korean underground nuclear tests to date have been conducted. In 2018, Punggye-RI was famously dismantled in a transparent manner in front of the world’s media. Now in 2022, a U.S. official tells ABC News that the facility at Punggye-RI is capable of testing a nuclear device in short order.

U.S. national security adviser Jake Sullivan told reporters Wednesday that the U.S. intelligence does reflect the genuine possibility that there will be either a further missile test, including a long-range missile test, or a nuclear test, or frankly, both, in the days leading into, on, or after the president’s trip to the region.

Sullivan said the U.S. was preparing for all contingencies, including the possibility that such a provocation would occur while we are in Korea or in Japan.

The Biden administration says the North could be ready to conduct a test there as early as this month.

Biden will visit both Japan and South Korea, two key regional allies with a history of icy relations. South Korea’s newly-minted conservative president Yoon Seok-you has called for a thaw.

Japan’s Prime Minister Fumio Kishida has said, There has never been a time when strategic cooperation between the two nations, and between them and the United States, has been more necessary and says there is no time to waste in improving bilateral ties.

Despite the friendly overtures from the leaders of the two nations, experts say neither side is willing to make the first move to resolve the rows.

The U.S. wants its allies to cooperate in coping with contemporary threats but they have remained divided over their shared past. Improving relations will be a difficult process because history is very politicized in both nations, he said.

Kingston said the recent failures of the two countries to see eye-to-eye is a wake-up call for those who have hopes that they could overcome the colonial past. They also battle over territory — the Dokdo/Takeshima islets and whatever else is handy.

Jaechun Kim, a professor of international relations at South Korea’s Sogang University, also has doubts fences can easily be mended.

Despite President Yoon’s signaling the desire for closer relations with Japan, he walks a tightrope, Kim said.

There is a limit to which he can be proactive here because if you’re seen as compromising on history issues toward Japan, that is politically suicidal in the Republic of Korea, he told.

Kim said Japan and Korea will have to have to find common ground somewhere.

We should not expect or push for a breakthrough on history issues. That’s not realistic, he said. Rather, the two countries will have to deepen cooperation on issues where their interests converge, issues such as economic engagement and maritime cooperation in Indo-Pacific, and trilateral security cooperation between ROK, Japan, and the U.S. in Northeast Asia to augment deterrence and defense against North Korea’s nukes and missiles.