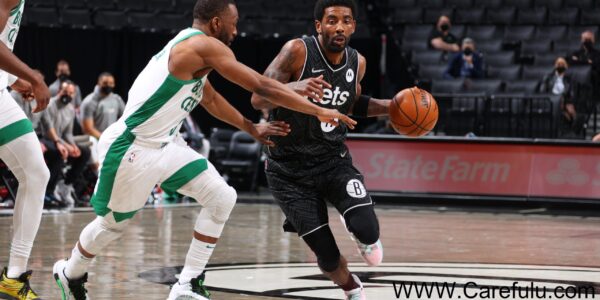 Game 2 Loss to the Celtics Has the Nets Grasping at Straws!

BOSTON: The clock ticked towards zero and along the Nets sideline two future Hall of Famers with more than 200 playoff games between them looked shook. This was a game Brooklyn had to win. Needed to win. Should have won. A 10-point halftime lead. Help from the supporting cast. A Celtics defense that in the first half allowed the Nets to shoot 61%. A team with Kevin Durant and Kyrie Irving would have to kick the game away to lose this one.

And it did. Badly. The Nets shot 31% in the second half. Durant, in those final 24 minutes, didn’t make a field goal. Irving, lustily booed for the second game in a row, finished 4-of-13. Seven Celtics finished in double-figures. Payton Pritchard Payton Pritchard! scored 10 in 16 minutes. Durant and Irving rank among the NBA’s most feared fourth-quarter scorers. Boston throttled the Nets 29–17 over the final 12 minutes.

The Celtics take a 2–0 series lead.

And the Nets are in a world of trouble.

For weeks, Brooklyn was the NBA’s boogeyman. Two games against the Celtics and the Nets have been exposed. Durant looks tired. He averaged 41 minutes per game in the final five games of the regular season. He logged 42 in the play-in game. Against Boston, Durant isn’t just matching up with good defenders. He’s wrestling with them. He’s scored 50 points in the first two games of this series. He’s needed 41 shots to do it.

They’re being physical, said Steve Nash. They’re up and into him, grabbing him, holding him, all that stuff you come to expect. He’s been uncomfortable and hasn’t looked like he’s been able to get his rhythm.

Said Durant, They’re playing me with two, three guys sometimes when I’m off the ball, mucking up actions when I run off stuff. I see Horford leaving his man and come over to hit me sometime. They’re just playing two or three guys, hitting me wherever I go.

Irving was brilliant in Game 1. In Game 2, he was a no-show. He played 40 minutes. He scored 10 points. He handed out one assist. His most positive contribution was on the glass eight rebounds. Irving faced the expected jeering from the 19,156 inside TD Garden. In Game 1, he fed off it. In Game 2, he flopped.

Ime Udoka spent one season as Steve Nash’s assistant. And in his first postseason as a head coach, he is schooling him. Udoka, who designed the NBA’s top ranked defense, is now wielding it like a two by four. The Celtics are manhandling Durant. They are squeezing Irving. Bruce Brown and Goran Dragic scored 30 points in the first half. In the second half, they scored 11. Offensively, Boston is engineering switches onto Brooklyn’s smaller guards and bulldozing them.

Udoka spent years as an assistant under Gregg Popovich.

Ime knows us real well, Irving said. I think he has some keys to the treasure chest that he’s telling those guys.

Nash’s adjustments have not been bad they have been nonexistent. His offensive system is as imaginative as a checkers board. Boston didn’t make any defensive changes after Game 1. Yet in Game 2, there was Durant, forced into deep catches before staring down a wall of defenders. He isn’t running off screens. He isn’t setting many of them for Irving. Nash has two of the most skilled players of this generation and his game plan has been to effectively to tell them to do something with it.

It’s desperation time in Brooklyn. Ben Simmons may be coming back Nash denied an ESPN report that the Nets are targeting Game 4 for Simmons’s season debut but he isn’t saving them. It’s easy to excuse an early playoff exit injuries, specifically to Joe Harris, the James Harden trade, the absence of Simmons, et al but getting broomed out by Boston would be a disaster. It would waste another MVP caliber year of Durant and raise more questions about whether he and Irving are the best fit.

As he wrapped up his postgame press conference, Irving was asked about the Nets lack of chemistry. Our identity is what it is, Irving said. Later, he praised the cohesion that the Celtics have played with.

The timing is right, said Irving. The window is now for these guys.

Indeed. Which means the Nets window, for this season anyway, may have already slammed shut.