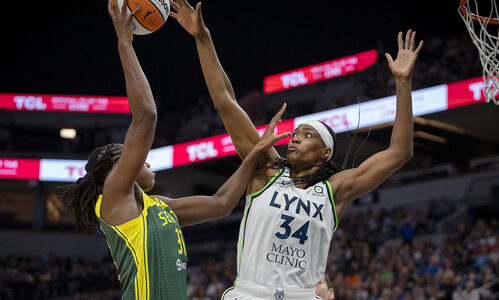 Given the emotional nature of the evening, the importance of the game, and the Minnesota Lynx’s desperate quest for a WNBA playoff bid, what happened at the start of their game with Seattle at Target Center on Friday night is hard to explain.

And yet there it was:

In front of an announced 12,134 fans, in the final regular-season home game of Sylvia Fowles’ wonderful 15-year career, with a postgame celebration for Fowles looming, the Lynx were whipped 96-69 by the Seattle Storm, adding a somber note to the rest of the evening.

Frankly, this one was over when the buzzer for the end of the first quarter sounded. By that point, two Storm players Jewell Loyd and Tina Charles had matched or outscored the Lynx by themselves. The Storm had scored as many points off turnovers as the Lynx had scored, period.

And it didn’t get better.

The Lynx dropped to 14-21 with the loss, and will almost certainly need to win in the season finale in Connecticut on Sunday to have a chance at a 12th straight playoff appearance.

After falling behind by 12 with barely three minutes gone, the Lynx never got closer.

Fittingly, Fowles finished with another double-double, getting 13 points and 12 rebounds. Aerial Powers (18) and Bridget Carleton (11) were in double figures off the bench.

Lynx coach Cheryl Reeve pulled Fowles from the game with two minutes left in the fourth quarter, to a standing ovation. Fowles hugged Reeve, then assistant coach and former teammate Rebekkah Brunson after returning to the bench.

But the Lynx shot 36.5% and made just four of 13 three-pointers. It was the most one-sided loss of the season for Minnesota on a night with so much on the line, easily eclipsing the Lynx’s 23-point loss in Seattle on opening night.

The first half of the first quarter was a disaster for the Lynx, who made just two of their first seven shots and turned the ball over four times resulting in seven Storm points. On defense, they struggled to defend the perimeter. The result:

And it didn’t get better, considering the stakes. The first quarter was the worst one the team has played this season, ending with Seattle up 30-10. The Storm turned six Lynx turnovers into more points (11) than the Lynx scored in total. The Storm had a 10-4 edge in the paint, a 9-0 edge on the break, and a 5-0 edge on second-chance points. Charles (12) and Loyd (11) combined for 23 of Seattle’s 30 points.

Regrouped, the Lynx started the second quarter well. Getting six points from Carleton and four from Fowles, Minnesota opened the quarter on a 16-8 run to pull within 38-26 on Fowles’ basket with 4:03 left.

After that, the Lynx got consecutive stops. Fowles missed after the first. And then Lindsay Allen had a wide-open three attempt that would have made it a nine-point game. But it went long.

After that? Stewart. She scored six points in a 7-2 Storm finish to the half that pushed Seattle’s lead back to 45-28.

Things only got worse in the third quarter, during which the Storm made 11 of 17 shots overall, four of five three-pointers, and scored 32 points, stretching their lead to 77-57.