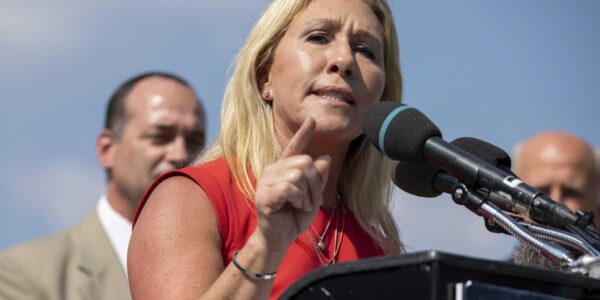 Marjorie Taylor Greene testifies as part of a legal challenge to her candidacy!

Controversial Republican U.S. Rep. Marjorie Taylor Greene of Georgia on Friday defended her comments ahead of the Jan. 6 insurrection at the U.S. Capitol while testifying under oath as part of a challenge to her reelection by voters and a supporting legal group, who are seeking to knock her off the ballot for her role prior to the riot.

Greene’s appearance in an Atlanta court Friday made her the first GOP member of Congress to testify publicly about Jan. 6, even as a Democratic led committee back in Washington, D.C., has spent months investigating the attack.

Greene was in front of an administrative law judge because a handful of voters in her district, represented by a nonprofit called Free Speech For People, say Greene should be disqualified because they allege she encouraged and supported the rioters who stormed the Capitol.

While on the witness stand, the congresswoman reiterated baseless claims about election fraud, and repeatedly said that her charged rhetoric ahead of Jan. 6 referred to challenging the electoral count, not a call for violence.

I don’t support violence of any kind, Greene said in response to a question. My words never ever mean anything for violence.

The courtroom was crowded with Greene’s supporters, who cheered when she entered.

Citing the 14th Amendment
Lawyers with Free Speech For People are leaning on a provision in the U.S. Constitution that forbids any member of Congress involved in an insurrection from serving in office. It’s a section of the 14th Amendment, passed in the years after the Civil War to prevent former Confederates from returning to their seats in Congress.

The legal theory is mostly untested in modern history.
Greene has long deployed violent rhetoric against her political opponents and has routinely spread false claims about the 2020 election, including in the leadup to Jan. 6, 2021.

This was not a case where the leaders were on horseback leading the charge, Ron Fein, legal director for Free Speech for People, told the judge. Rather the leaders of this insurrection were among us, on Facebook, on Twitter, on corners of social media that would make your stomach turn. The evidence will show that Marjorie Taylor Greene was one of them.

Greene says the challenge to her candidacy is a lie and a scam designed to take away her constituents’ rights to vote for the candidate of their choice.

Greene answered many questions Friday about her statements, social media posts and conversations in the days before Jan. 6 with I don’t know or I don’t recall.

Asked whether her office gave tours to any members of the public in the days before the riot, or whether her campaign or congressional staff provided information or funds to people who participated in or organized the riot, she said no.

1776 moment
Lawyers for Free Speech For People pointed to a tweet sent on Jan. 5, calling the next day a 1776 moment, which is code for political violence in some far-right circles.

Greene told the judge she’s never heard anyone use 1776 in connection with violence.

The plaintiff’s lawyers also played a January 2021 Facebook video in which Greene said, You can’t allow it to just transfer power peacefully like Joe Biden wants and allow him to become our president. Because he did not win this election. It’s being stolen.

In the same video, Greene encouraged people to come to Washington as she and other members of Congress prepared to object to the certification of the election results.

Greene says the video was taken out of context.

Asked whether she advocated to then-President Donald Trump that he impose martial law to remain in power, she said, I don’t recall.

Her attorneys argue that not only is her rhetoric protected political speech, she was a victim of the Jan. 6 attack, not a participant.

The right to vote is at stake, right here, right now because they want to deny the right to vote to the thousands of people in the 14th district of Georgia by removing Greene from the ballot, James Bopp, an Indiana-based attorney for Greene, said in opening arguments. Those voters have the right to vote for the candidate of their choosing.

Similar challenges elsewhere
A similar challenge to Republican Rep. Madison Caw thorn’s candidacy was tossed out by a judge in North Carolina. A judge on Friday also dismissed efforts by the same group to challenge Arizona lawmakers. Appeals have been filed in both.

Greene asked a federal court to dismiss her challenge, but the judge let the case proceed.

In Georgia, the administrative judge will next lay out the facts of the case and make a recommendation to the Georgia secretary of state, Republican Brad Raffensperger, about whether Greene should remain on the ballot. Raffensperger is up for reelection himself and faces a GOP primary challenge, so he may be hesitant to make political waves by pulling Greene from the ballot before the May 24 primary.

Breadroot said briefings from both parties are due midnight Thursday and he will aim to release his recommendation within a week of that deadline.

Whatever the decision, it will almost certainly be appealed to a higher court.

Page Pate, a trial attorney in Georgia, said that disqualifying Greene from the ballot might not be the challengers’ only goal.

They want to hear her questioned under oath, to find out what involvement, if any, she had in this insurrection, and if she makes any false statement, she could be charged with perjury or perhaps some other crime, Pate says.

Greene is popular in her north Georgia district, which stretches from the exurbs of Atlanta to the foothills of the Appalachians and the border with Tennessee. It’s one of the most conservative congressional districts in the country.

She’s my congresswoman, so I do support her, she says. I don’t like them trying to keep Marjorie off the ballot. They just don’t understand, they’re galvanizing the district more towards her.