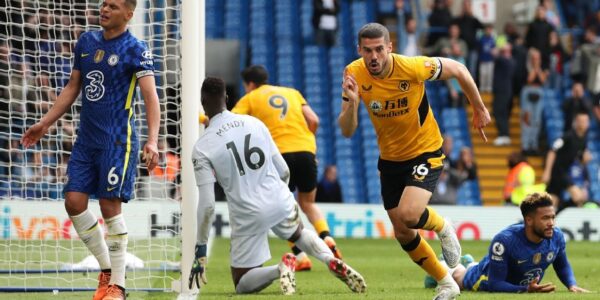 After scoreless draws in the previous two encounters with Wolverhampton Wanderers, the first 45 minutes of this Saturday afternoon meeting at Stamford Bridge yielded no goals either, although the Blues twice had the ball in the Shed End net, only for a controversial decision to award a foul and then a VAR call for offside to rule out Timo Werner and Ruben Loftus-Cheek goals.

Wolves wasted their chances on the break before the interval and then went behind soon after the start of what proved a lively second period. Having been fouled, Lukaku converted a penalty and then scored in open play two minutes later from a Christian Pulisic pass for his first league goal since December.

Those looked to have done the job but Francisco Trincao pulled one back late in the game and then had another shot deflected just wide to jangle the home fans’ nerves further. Those fears were realized when with 96 minutes on the clock, Conor Coady headed in from close range to turn three precious points for Chelsea into one.

Defensive frailties mean there is still work to do in our remaining three games of the league season.

The selection
Having studied his squad in what he described as a week of raised-intensity training, Thomas Tuchel made three changes from the defeat at Everton. Two of those were in attack where Romelu Lukaku and Christian Pulisic came in for Kai Havertz and Mason Mount. The other was an enforced one in midfield with Mateo Kovacic replacing the injured Jorginho, as he had done at half-time last Sunday.

Both these sides came into this game off the back of defeats, Chelsea having lost by a single goal at Everton with Wolves defeated heavily at home, 3-0 by Brighton.

Tuchel in the build-up to this game said the key to breaking down our defensively strong opponents is to play with a high tempo, and he was soon on his feet on the touchline clapping at his players to do just that.

Werner forced the first save of the game with an angled shot, kept out one-handed by Jose Sa. Pulisic, playing as a no.10 behind the two strikers, had looked sharp from the start and he fed Lukaku for a clean strike but one that was blocked by Wolf’s defense.

The West Midlanders looked to make something happen for their attack with a long ball forward with 16 minutes played but Raul Jimenez had been offside before creating a chance.

Pulisic and Reece James both shot wide from distance and a Marcos Alonso cross caused a goalmouth melee. Chelsea was looking by far the more likely side to make a breakthrough with a quarter of the game played.

However recent matches between these sides have been especially tight and clearer chances were needed. For Wolves, Ruben Neves had a deflected shot go wide following a free-kick.

Two Blues goals were ruled out
With 33 minutes played, Werner had the ball in the net but the whistle had just blown. He clearly disagreed with the verdict that he had barged Romain Saiss as he made it to the ball. The Wolves defender looked to be going down anyway.

Another decision went against the Blues soon after, this time via VAR. After the ball had pinged around following a Chelsea corner and Loftus-Cheek found the net from only inches out, there were two offside checks made. We passed the first one but the second, with the ball bouncing off Lukaku before reaching Ruben, went Wolf’s way.

Despite those Chelsea attacks, our opponents could well have gone ahead just before half-time when suddenly we were twice caught lacking numbers at the back as they counter-attacked. You, Mendy, saved well from Neto and thankfully Leander Dendoncker blazed the loose ball over the bar.

Then when there was still a chance for another Wolves break it was again a wasteful finish, this time by Rayan Ait-Nouri. Between those scares, Lukaku had forced a save from Sa with a low hit on the turn.

Rom rampage
There were changes at the break, with Saul on for Marcos Alonso and James moving into the back-three, swapping places with Cesar Azpilicueta.

It was a good start to the second period. After a slick move, Werner was denied by a good save and James almost caught Wolves out with a free-kick he fired directly at goal when they expected across.

The goal was coming though, and this time VAR played it Chelsea’s way and a decision did not go for Saiss. The central defender was on the ground when Lukaku tried to clamber over him and was brought down. The ref, on VAR’s recommendation, went and watched it again and decided a leg had been lifted to impede our center-forward.

Lukaku took the penalty with a little stutter and sent Sa the wrong way. 1-0.

Within two minutes it was 2-0. This time Wolves contrived to lose the ball while playing it out. Pulisic quickly found Romelu who wasted no time in hitting the target with a sumptuous low finish.

Mendy preserved the advantage with a good save from Hwang, followed immediately afterward by an equally sharp one from Sa to keep out Kovacic.

Wolves fightback
The entertainment levels had stepped up in this second half compared with the first but tension began to rise when with just over 10 minutes to play, Wolves did make one of their counter-attacks pay. After Kovacic had been dispossessed deep in our opponents’ half, the break ended when substitute Trincao fired in an unstoppable effort.

The same player then went for goal again and this time, a deflection favored Chelsea as the ball rolled just wide of Mendy’s net. Jimenez was worryingly close to finding the target too to groans from the Wolves fans down that end and the Blues were hanging on when six minutes of added time were signaled.

Just when it appeared those had been navigated, one more cross came in from the right, and Wolves skipper Coady was the one in the crowd in the middle who met it to head home. Agony!

The result leaves us four points ahead of Arsenal and six in front of Spurs before those two play their weekend games.

What’s next?
First, there is our final away game of the season, at struggling Leeds United on Wednesday evening, before attention switches from the Premier League to the chance to add a third trophy to this season’s collection when we take on Liverpool at Wembley in next Saturday’s FA Cup final. Come on you Blues!