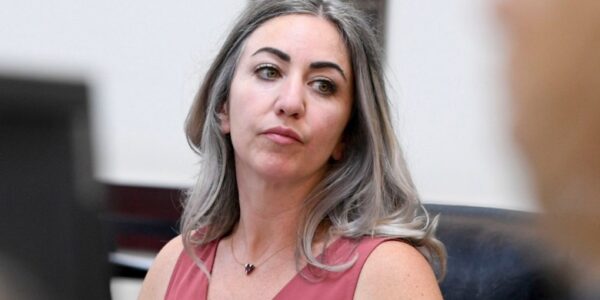 RaDonda Vaught, a former Tennessee nurse convicted of two felonies for a fatal drug error, whose trial became a rallying cry for nurses fearful of the criminalization of medical mistakes, will not be required to spend any time in prison.

Davidson County criminal court Judge Jennifer Smith on Friday granted Vaught a judicial diversion, which means her conviction will be expunged if she completes three-year probation.

Smith said the Murphey family suffered a terrible loss and nothing that happens here today can ease that loss.

Miss Vaught is well aware of the seriousness of the offense, Smith said. She credibly expressed remorse in this courtroom.

The judge noted that Vaught had no criminal record, has been removed from the health care setting, and will never practice nursing again. The judge also said, This was a terrible, terrible mistake and there have been consequences to the defendant.

As the sentence was read, cheers erupted from a crowd of hundreds of purple-clad protesters who gathered outside the courthouse in opposition to Vaught’s prosecution.

Vaught, 38, a former nurse at Vanderbilt University Medical Center in Nashville, faced up to eight years in prison. In March she was convicted of criminally negligent homicide and gross neglect of an impaired adult for the 2017 death of 75-year-old patient Charlene Murphey. Murphey was prescribed Versed, a sedative, but Vaught inadvertently gave her a fatal dose of vecuronium, a powerful paralyzer.

Charlene Murphey’s son, Michael Murphey, testified at Friday’s sentencing hearing that his family remains devastated by the sudden death of their matriarch. She was a very forgiving person who would not want Vaught to serve any prison time, he said, but his widower father wanted Murphey to receive the maximum sentence.

My dad suffers every day from this, Michael Murphey said. He goes out to the graveyard three to four times a week and just sits out there and cries.

Vaught’s case stands out because medical errors even deadly ones are generally within the purview of state medical boards and lawsuits are almost never prosecuted in criminal court.

The Davidson County district attorney’s office, which did not advocate for any particular sentence or oppose probation, has described Vaught’s case as an indictment of one careless nurse, not the entire nursing profession. Prosecutors argued in the trial that Vaught overlooked multiple warning signs when she grabbed the wrong drug, including failing to notice Versed is a liquid and vecuronium is a powder.

Vaught admitted her error after the mix-up was discovered, and her defense largely focused on arguments that an honest mistake should not constitute a crime.

During the hearing on Friday, Vaught said she was forever changed by Murphey’s death and was “open and honest” about her error in an effort to prevent future mistakes by other nurses. Vaught also said there was no public interest in sentencing her to prison because she could not possibly re-offend after her nursing license was revoked.

I have lost far more than just my nursing license and my career. I will never be the same person, Vaught said, her voice quivering as she began to cry. When Ms. Murphey died, a part of me died with her.

At one point during her statement, Vaught turned to face Murphey’s family, apologizing for both the fatal error and how the public campaign against her prosecution may have forced the family to relive their loss.

You don’t deserve this, Vaught said. I hope it does not come across as people forgetting your loved one. I think we are just in the middle of systems that don’t understand one another.

Prosecutors also argued at trial that Vaught circumvented safeguards by switching the hospital’s computerized medication cabinet into override mode, which made it possible to withdraw medications not prescribed to Murphey, including vecuronium. Other nurses and nursing experts have told KHN that overrides are routinely used in many hospitals to access medication quickly.

Theresa Collins, a travel nurse from Georgia who closely followed the trial, said she will no longer use the feature, even if it delays patients’ care after prosecutors argued it proved Vaught’s recklessness.

I’m not going to override anything beyond basic saline. I just don’t feel comfortable doing it anymore, Collins said. When you criminalize what health care workers do, it changes the whole ballgame.

The case also spurred a considerable backlash on social media as nurses streamed the trial through Facebook and rallied behind Vaught on TikTok. That outrage inspired Friday’s protest in Nashville, which drew supporters from as far as Massachusetts, Wisconsin and Nevada.

Among those protesters was David Peterson, a nurse who marched Thursday in Washington, D.C., to demand health care reforms and safer nurse-patient staffing ratios, then drove through the night to Nashville and slept in his car so he could protest Vaught’s sentencing. The events were inherently intertwined, he said.

The things being protested in Washington, practices in place because of poor staffing in hospitals, that’s exactly what happened to RaDonda. And it puts every nurse at risk every day, Peterson said. It’s cause and effect.

Tina Vinsant, a Knoxville nurse, and podcaster who organized the Nashville protest, said the group had spoken with Tennessee lawmakers about legislation to protect nurses from criminal prosecution for medical errors and would pursue similar bills in every state.

Vinsant said they would pursue this campaign even though Vaught was not sent to prison.

She shouldn’t have been charged in the first place, Vinsant said. I want her not to serve jail time, of course, but the sentence doesn’t really affect where we go from here.

Janis Peterson, a recently retired ICU nurse from Massachusetts, said she attended the protest after recognizing in Vaught’s case the all-too-familiar challenges from her own nursing career. Peterson’s fear was a common refrain among nurses: It could have been me.

And if it was me, and I looked out that window and saw 1,000 people who supported me, I’d feel better, she said. Because for every one of those 1,000, there are probably 10 more who support her but couldn’t come.