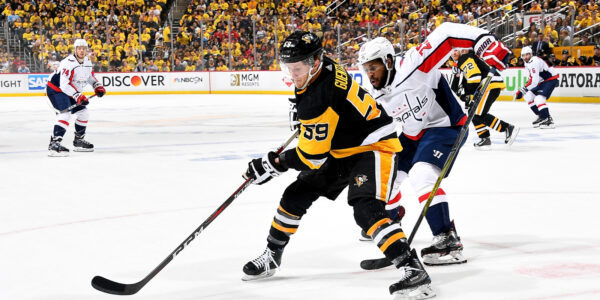 Penguins Issues Are Fixable in Game 7

The Pittsburgh Penguins lost 5-3 in Game 6, forcing a Game 7 at Madison Square Garden. The bad news is the Penguins have had two chances to finish off the Rangers and have failed both times. The good news is that the Penguins did just as much to beat themselves as the Rangers did to win. And that is a fixable issue.

We learned over the past two games that, even without a handful of their best players, the formula is there for the Penguins to beat the Rangers.

In both games, the Penguins came out of the gates with an effective game plan that put them in the lead 2-0. They haven’t drastically outperformed the Rangers in those periods, but they played mistake-free hockey and took what was given to them.

The Penguins also did a great job of keeping the Rangers away from the crease in the defensive zone in both opening periods, allowing Louis Domingue to see shots coming in and trusting him to smother any second-chance opportunities.

The first periods of Game 5 and Game 6 provided a road map to victory for the Penguins. They just need to follow through.

Even before the Evan Rodrigues roughing call, the Penguins were on their heels from puck drop. They were down a forward with the departure of Brian Boyle, one of the Penguin’s top penalty killers, late in the first period. Once that penalty was taken by Rodrigues, the door was open for the Rangers.

Mika Zibanejad scored his first goal of the series just five seconds into the man advantage, and you could feel the momentum swing. The Penguins followed it up with an ineffective five-on-three power play, followed by a poor change on the penalty kill, leading to a goal from Chris Kreider that put the Rangers up by one.

If they could’ve performed better on special teams in that period, the entire game would’ve looked much different.

If Game 7 is played at even strength, the Penguins have a clear advantage. So, the focus for the Pens is to play smart hockey and stay away from the bad penalties that plagued them in Game 6.

The lasting memory of this game may end up being the game-winning goal allowed by Louis Domingue with under two minutes remaining in the third period. His tendency to trap pucks between his blocker and glove has made many anxious throughout this series. As time has gone on, more Rangers have begun aiming their shots high and towards Domingue’s left shoulder, which usually prompts this reaction from him.

It may be as simple as Domingue not being confident in his high blocker side, but it cost the Penguins in Game 6.

For all of Domingue’s faults, he held down the fort throughout this series. Early on, his ability to make the timely save was an integral part of the Penguins building a 3-1 series lead, but that side of his game has dissipated in his last two outings. Luckily, for the Penguins, reinforcements may be coming for Game 7.

Penguins starting goaltender Tristan Jarry was ruled out for Game 6 early in the day. With the season on the line, he could potentially return, giving the Penguins a much-needed boost between the pipes.

Two other injured players, Sidney Crosby and Rickard Rakell could return to the lineup for Game 7.

This series was turned on its head when Crosby went down in Game 5 after a collision with Rangers defenseman Jacob Trouba, and his return could be what swings the pendulum back in the Penguin’s favor.

The road map has been laid for the Penguins to find success in Game 7. Multiple injured players returning and the Penguin’s ability to keep the game at even strength by minimizing bad penalties will make them the favorite in the winner-take-all matchup at Madison Square Garden.