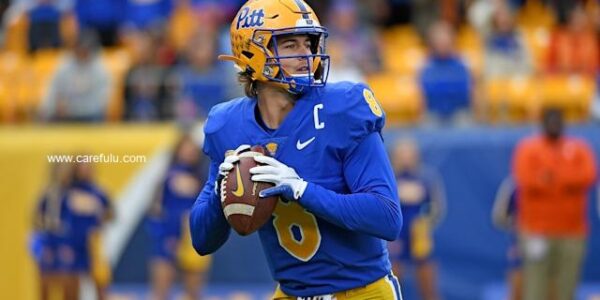 PITTSBURGH: For months, the Pittsburgh Steelers searched across the country for Ben Roethlisberger’s successor. It turns out he was right in front of them all along.

With the No. 20 pick in the NFL draft, the Steelers selected Pitt quarterback Kenny Pickett on Thursday night, making him Roethlisberger’s heir apparent and the only quarterback selected in the first round.

We circled the globe or at least the United States here the last several months, man, just exploring and researching, coach Mike Tomlin said. And it’s funny, we ended up with a guy from next door.

Pickett watched the draft from a party with his parents and family in New Jersey, and as soon as he saw the 412 area code pop up, he knew where he was headed.

I’m pretty familiar with the area code, Pickett said with a laugh. I had a pretty good idea of who it was. I was speechless. It’s a lifelong dream, 23 years of hard work to get to this point. That all came in a phone call. It was probably one of the best feelings of my life. I’m so excited to get started and get to work with the guys who are next door to me my whole career in Pittsburgh. And, by selecting Pickett, the Steelers avoid potentially making a Dan Marino-like mistake, when they passed on the fellow Panther in the 1983 NFL draft. After coming back for a fifth season his fourth as a starter Pickett exploded for 42 touchdowns en route to an ACC championship.

It was a good move for him to stay in school, general manager Kevin Colbert said. It just talks and preaches about what you can do when you stay and continue to develop and turn into a first round pick. Kenny is special, and he grew from like I said, we watched him come in as a freshman. You knew who he was, and when he became their starter, you just continued to watch him grow into the great season that he had.

In Pickett, the Steelers believe they have a mature player with a high floor and the kind of mobility and accuracy necessary to flourish in the NFL and in offensive coordinator Matt Canada’s system. Canada recruited Pickett to Pittsburgh, though he didn’t get to coach him as a Panther.

He has a quarterback in the pocket, he gets the guy on the move, and I feel that’s underrated in my game, Pickett said. I feel like I do a really good job of getting outside the pocket and making plays, and he does that with his play design naturally. I feel like I do all the great things that he wants and that’s why he recruited me for his offense. That’s why I feel like I’m in Pittsburgh, now, again. I can’t wait to get back into it, obsess over the playbook. Everything I do will be learning that playbook and being a Pittsburgh Steeler.

The Steelers had their pick of quarterbacks with the selection, but the organization opted to go with Pickett over Liberty’s Malik Willis and Cincinnati’s Matt Corral, making him the first quarterback selected in the 2022 draft.

We’re super, super excited to be able to draft Kenny Pickett with our first-round pick, Colbert said. Honestly, never thought he would make it to us at 20. Exciting times for us, for Kenny, for the University of Pittsburgh, and for Pittsburgh in general. It’s great. We couldn’t be more excited.

He added later: Obviously, when you take this guy first, he was our top choice, and again, can’t take anything away from the rest of that group, but Kenny was clearly our top pick at that position.

The Steelers brass did their due diligence evaluating the 2022 quarterbacks, traveling across the country for pro days, but they selected Pickett, 24, in large part because of his NFL readiness and the maturity they saw from him on and off the field during his five years as a Panther a trait they highly value in someone slotted to take over for a Super Bowl-winning franchise quarterback.

Kenny is just a mature, even-keeled guy, Colbert said. A lot of times like when we’re studying the quarterbacks, we not only watch them on the field, but we watch them off the field, when they come off, how are they with their teammates, how do they interact with their coaches, how do they conduct media interviews. We talk to Kenny about how he’s going to handle this in this market because he’s going from a University of Pittsburgh great to a potential Steeler great.

But it’ll be different for him. He won’t be a college player any longer, he’ll be a professional, and there will be different expectations. But we feel that the maturity that he displayed on and off the field will help him in that endeavor.

Because of that maturity, Pickett will have an opportunity compete for the starting job along with former first-round quarterback Mitch Trubisky and 2018 third rounder Mason Rudolph, Tomlin said.

I’m pretty familiar with competing, Pickett said. I’ve been doing it my whole life. I know how to be a good teammate and compete at the same time. I’m excited to join the quarterback room, get to know those guys and just get better. We’re all chasing a championship. That’s what matters. That’s what I’m excited to go do.