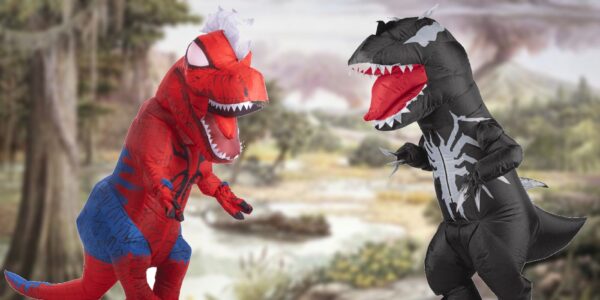 Dr. Strange’s opening of the multiverse has resulted in some interesting occurrences in the Marvel universe. As a result, some entertaining toys, such as those three Peter Parkers from different universes can now be yours. Now we have a Spiderman X T-Rex Inflatable Dinosaur Costume thanks to a dinosaur version of Peter Parker from some strange Jurassic universe that was introduced in the Edge of Spider-Verse comic book. Given how much people enjoy both superheroes and dinosaurs, it’s not surprising that merchandise in the type of Jazwares Marvel Spider-Rex Inflatable Adult Costumes is instantly created.

Spiderman X T-Rex Inflatable Dinosaur Costume
Yupe! You may now purchase an adult-sized Spider-Rex outfit, allowing you to attend your next Halloween party as a web-slinging dinosaur from Earth-66 (WHAT???). Attending a party with a superhero theme? This will succeed. How about a party with a dinosaur theme? Also, it is effective. In addition, since Spider-Rex is a relatively new character, we expect this to be a huge success everywhere you wear it.

The Jazwares Marvel Spider-Rex Inflatable Adult Costume allows you to transform into Peter Parker from Edge of the Spiderverse Vol. 2 #1 after he was bitten by a radioactive spider after being struck by a meteor filled with radioactive spiders. It resembles an extremely awesome spider-powered dinosaur, complete with a white mohawk, enormous white eyeballs, and the red-and-blue color scheme of the well-known Amazing Spider-Man.

With its wide-open snout and sharp fangs, the dinosaur with superpowers is fairly threatening, and a window within the mouth provides a chance to observe from inside the suit. It also comes with clawed gloves, allowing you to scratch, scrape, and tear your way through head-to-head combat with any unlucky individual foolish enough to wear a Venomosaurus costume to the same party or performance as you. Jazwares also sells a costume of the T-rex from Old Man Logan who joined with the Venom symbiote, if that’s more your style.

The Jazwares Marvel Spider-Rex Inflatable Adult Costume features an internal fan driven by AA batteries to inflate the suit, allowing it to resemble a muscular dinosaur. You will get all the hallmark features of a T-rex: from short hands and the cute tail to its skin texture which is supposedly full of scales. While it does resemble the comic book’s spider-bitten dinosaur, the costume has no superpowers or prehistoric abilities, so it’s up to you to reinforce it with web shooters, dinosaur growls, and whatever witty soundbites Peter Parker truly utters in his teenage dinosaur voice.

How simple is it to maneuver in this inflatable dinosaur costume? I am not entirely sure. Given the tiny legs and the inflatable tubes that encircle the body, we imagine that it is not the most mobile thing on earth. Essentially, you shouldn’t expect to be able to comfortably race through the Comic-Con trade hall or burn up the dance floor at an afterparty while wearing this item. The Jazwares Marvel Spider-Rex Inflatable Adult Costume will be available on October 1 for US$99.99 (RM449). For more information, head over to Jazwares’ official website.