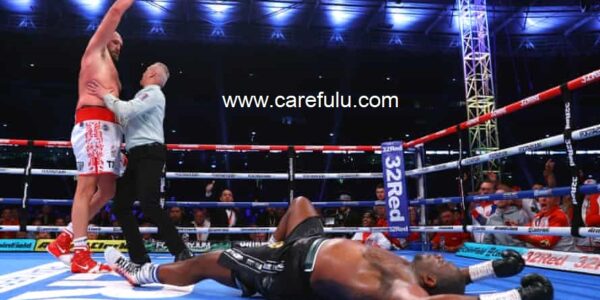 Tyson Fury retained his WBC world heavyweight title by stopping Dillian Whyte brutally and clinically near the end of the sixth round on Saturday night at Wembley Stadium. After a cagey and often ugly bout, which Fury controlled even though both fighters were warned by the referee for some roughhouse brawling, the champion brought the fight to a shuddering conclusion. He snapped out another left jab and then, with Whyte suddenly open and vulnerable, Fury uncorked a vicious right uppercut.

It was a devastating punch, reminiscent of the chilling uppercut that Alexander Povetkin used to knock out Whyte in August 2020. But this time Whyte was not rendered unconscious despite losing a tooth and his bearings. He staggered to his feet but, trying to walk towards the referee, Mark Lyson, he weaved and stumbled. Lyson had no option but to wave the fight over because Whyte had clearly been separated from his senses.

Whyte came out boxing as a southpaw but Fury remained watchful, preferring to land the occasional jab and sharp combination. The challenger tried to jab often to Fury’s relatively fleshy body but the difference in class was apparent. Fury also switched back and forth from southpaw to his more usual orthodox style. Whyte threw some big punches, but few of them came close to landing, and he seemed intent on turning the fight into a brawl.

At the end of the third, as Vaseline was smeared across his face, Whyte already looked to be breathing hard in his corner. Fury, meanwhile, was calm and composed as he listened to instructions from his trainer, Sugarhill Steward.

Both fighters were warned in the fourth after a clash of heads which opened up a small cut over Whyte’s right eye. Lyson brought them to the centre of the ring at the start of round five to tell them bluntly that they needed to avoid any foul tactics. Each man landed a thudding body punch but the greater precision of Fury’s work, behind his jab and combinations, was obvious.

And then, late in the sixth, Whyte’s hopes were obliterated. The champion’s superior skill, sheer size and punching power were too much for him.

Fury has never lost in a long career that began in December 2008 and this was his 33rd professional fight. At six feet nine he is five inches taller than Whyte and he has an even greater seven inch reach advantage. He also has fast feet, sheer ringcraft and a finisher’s instinct which overwhelmed Whyte on a crushing night for the Jamaican-born Londoner.

Steward and Andy Lee, who is one of the most impressive young trainers in Britain and Ireland, have had a profound impact in Fury’s corner. In the last two years they have turned Fury into a much more effective and concussive puncher. This latest knockout came straight from the savage heart of the Kronk gym in Detroit where Sugarhill and Lee had spent so many years together under the inspirational tutelage of the great Emanuel Steward. Knockouts always mattered at the Kronk and they now matter and even define Fury as the best heavyweight in the world.

Whyte had tried to unsettle Fury, who is the master of boxing mind-games, by remaining quiet and elusive throughout the protracted fight build-up. While he was furious with the way his cut of the £41,025,000 purse had been reduced to 20%, Whyte hoped to disrupt Fury by refusing to engage with him before the bout. But a decent idea, because Fury is so adept at needling his opponents, proved of limited use at a crammed Wembley where the vast majority of the 94,000 crowd supported the lauded Gypsy King. Whyte accepted his role of underdog with apparent relish but it carried little relevance once Fury took charge and carved out the fight’s violent conclusion.