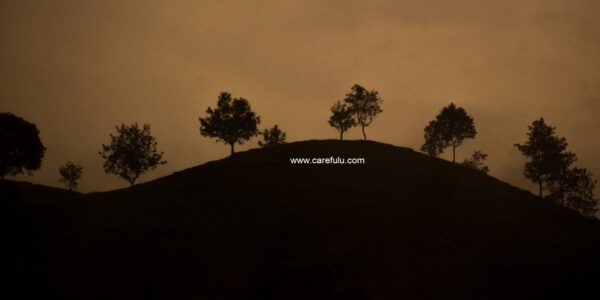 When the Dawn Seems to Die!

Have you ever found yourself in a night so black that you nearly stopped hoping for the morning?

Some guilt feels so deep that you wonder if you should just lie down and die. Some mental or spiritual midnights feel so thick, and the sky so starless, that a step in any direction seems useless. Sometimes, you not only walk through the valley of the shadow of death, but you collapse part way through and don’t rise.

Maybe you’ve been there, as I have. Maybe you are there right now. If so, Holy Week offers a fellow failure, an anguished friend, a brother in the darkness. If anyone has tasted the bitter salt of midnight weeping, he has. And if anyone can testify to the miracle of dawn and the drying of tears, he can.

What was happening in those dreadful hours on Holy Saturday, like Peter, sobbing and beating his breast, remembered his three denials, remembered Jesus’s final look ‘Luke 22:61’, remembered how it all ended, and yet somehow did not go hang himself like Judas? A scene from Maundy Thursday gives us the answer: the prayer of Jesus was holding him.

A praying Christ was Peter’s only hope against the accumulated powers of sin, Satan, and despair. And ours.

Satan Roars
Simon, Simon, behold, Satan demanded to have you, that he might sift you like wheat.

Earlier in Luke’s Gospel, we read the foreboding words, When the devil had ended every temptation, he departed from Jesus until an opportune time. As night falls on Thursday, the time has come, and the devil knows it. And so, Satan, after devouring one of the twelve, roars for the other eleven.

For three years, Jesus had stood between Peter and the dragon’s mouth, keeping him, guarding him. But now he was leaving, and Peter, like Job before him, would discover how much his strength rested on the invisible shield of his Lord. For the first time, he would walk the valley without the familiar comfort of his shepherd.

Satan demands to sift the disciples: to throw them on the sieve and shake, shake, shake until Simon Peter was only Simon again clay and not rock, a fisher of fish and not of men. Here is the absolute terror behind our darkest nights. We feel like we’re unraveling as if our testimony is being told in reverse. We fear we’re falling back into a Christless past.

We would if Jesus left us alone in Satan’s sieve. Thank God he doesn’t.

Jesus Prays
But I have prayed for you that your faith may not fail.

Peter will still be put in the sieve. But Jesus asks that, in all the shaking, Peter’s faith will not fall dead to the ground. He asks for an ember to burn under the ashes of Peter’s failure a secret comfort in his weeping, a buried warmth beneath his anguish, a hidden hope that would compel him to come Sunday to sprint to the tomb rather than follow Judas.

In all likelihood, Peter could neither see nor feel the ember. He may have felt inconsolable, sure that this darkness would never see the dawn. Maybe you feel similarly. Know this: Jesus has seen embers of faith in his saints where they saw only ash. Your night, no matter how black, is no sure sign that your faith has finally failed and fled you.

Jesus still held Peter, even from the tomb. So he holds all his people, even when a stone seems to have rolled over the heavens. And we can feel him holding us when we, like Peter, stubbornly refuse Judas’s despair, and labor to believe even on the bleakest Saturday.

In the coming hours, the sun’s light would fail. But in answer to Jesus’s prayer, Peter’s faith would not.

Peter Turns
And when you have turned again, strengthen your brothers.

When Jesus looks at Peter, he sees the three denials hiding in his heart But he also sees something deeper than his denials, a threefold I love you that will survive till Sunday, sustained by his own prayers. He sees a man who will plant his feet in the same footsteps as his denials, this time walking in the opposite direction.

And even now, Jesus wants Peter to see himself beyond the coming misery. And so, he doesn’t say, if you have turned again, but when. Peter’s perseverance does not rest on the slender thread of his own power but on the unbreakable beam of Christ’s own prayers. And so it is for all Christ’s disciples. Our deliverance whether from our own sin or from darkness, not our fault may seem uncertain on our side; we wonder if our faith will fail along the way. But on Jesus’s side, our deliverance is as certain as his own intercession. If we are truly in Christ, our turning is a when not an if.

And in the matchless mercy of Jesus, we will find, as Peter did, that he welcomes us back as not a slave but a son, reassured and recommissioned. When you have turned again, strengthen your brothers. The one who was too weak to stand with Jesus will now strengthen others, his failure had fitted him for a wiser, humbler, more Christward ministry, resting on power not his own.

Peter now knows the weakness of Peter, the strength of Satan, and the overpowering redemption of Jesus. And the restored Peters among us, who know the same firsthand, are often best suited to strengthen others.

He Prays for You
What might Jesus have prayed for Peter on that darkest of nights? We get a clue in John’s Gospel.

I do not ask that you take them out of the world, but that you keep them from the evil one.

Jesus did not ask that Peter be removed from the world, where the devil prowls. Peter felt the power of darkness on Maundy Thursday, and the darkness nearly broke him. But Jesus did ask that Peter be kept from the devil’s devouring jaws. And the Father answered: Peter did not become a Judas.

We may find, too, that Jesus’s intercession does not keep us from nights whose darkness nearly swallows us. Don’t come undone, and don’t despair, if the sky above you looks as black as Peter’s. Instead, hope. Pray. Huddle together with the other disciples, and wait for Sunday morning.

In time, something will stir on the horizon of this midnight: a light beyond hope, magic deeper than the misery of sin or the mercilessness of Satan. Jesus prays for you.